Trovo: Create A Command To Add Users To Roles

Roles are a unique feature of Trovo, and as a Trovo streamer, you can use Botisimo to make a custom command that your viewers can use to automatically assign themselves a Custom Role that you've created! Here's how.

First, confirm the Role that you want to make the command for. You can check this in your Trovo Creator Studio, under the Community section.

In this example, the Role we're making a command for is "egg".

Next, head to your Botisimo page, and go to your Commands section.

Click the "+ CREATE COMMAND" button to start the process of making a new custom command.

The response we're gonna use in our new command is:

Let's break-down each part of how this response works:

So, for this example, we're gonna call the command "!egg", and enter this in the Response field:

Additionally, we're also going to limit this command to be only used on Trovo by having only the Trovo box checked under the "Platforms" section.

Here's an example of how it should look: 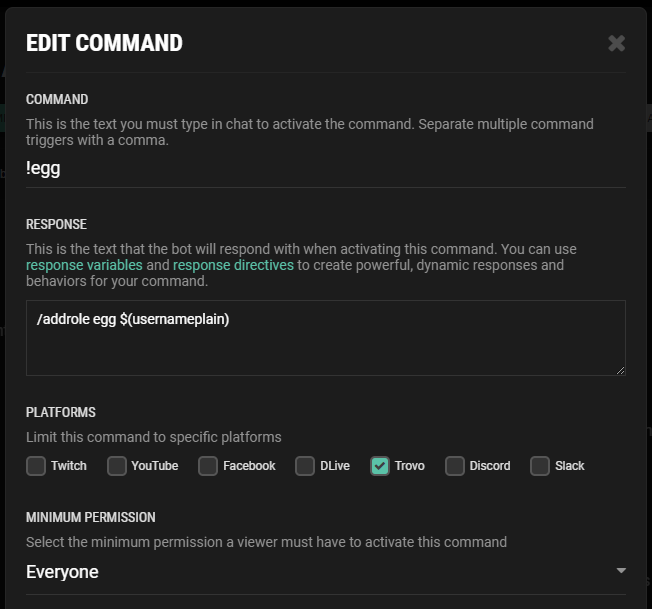 Click the "Save" button to save the new command, and now users should be able to use the command to be added to your Custom Role.

Here's an example of what it looks like when successfully used: 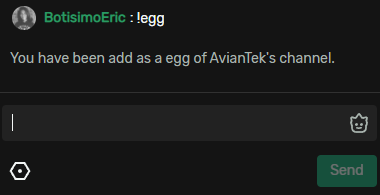 And if I go back to my Role Manager in Trovo Creator Studio, I can see that I've been successfully added to the Custom Role:

That's pretty much it!

If you want to make a command that removes users from a Custom Role, just do the same thing, but use "/removerole" instead of "/addrole".

If you have questions, please contact us at support@botisimo.com.

Why this article is not helpful?